The Bolt Pro is our user friendly Race board, and also comes ready out of the box to be enjoyed with a foil. As a far advanced Freeride board, the Bolt Pro is crazy fast, with the power of the Proton Pro, yet with a more accessible and friendly trim.

With its 10 mm of V, it naturally softens the ride over chop on rougher seas. As in our dedicated race board, the Bolt Pro comes with tail cut-outs in combination with a light tail release that helps reduce the wetted surface, providing you with sensational acceleration. Being the evolution of our highly successful and best selling Freerace line, the new Bolt Pro incorporates years of development, the feedback from valued customers around the world, as well as the development of three generations of Proton Pro boards in the PWA.

Being a hybrid between its predecessor and the new Proton Pro’s shallower double concave, and reduced V of the tail, the Bolt Pro’s bottom shape blends the acceleration, speed and comfort of both concepts. With a slightly higher entry rocker from the previous line, it feels balanced in both flat water and the open ocean, across a long coast run, with all the speed and control. By setting the mast track deep into a concave deck, the draft of the sail is lowered, resulting in furthermore forward drive. From easy, accessible performance, to a dramatically improved foiling capacity, the Bolt has been brought right up to date for 2020, establishing itself as a fantastic all-rounder in this freeride/blasting class. 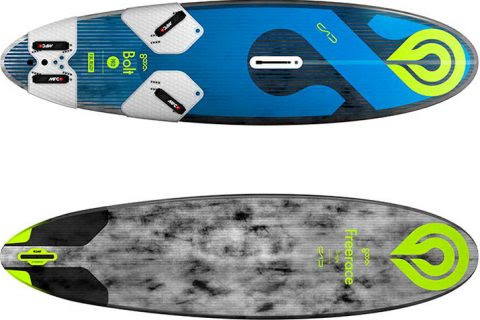 Described by the brand as their “user-friendly race board” the Bolt Pro range has been completely revised for 2020, encompassing five sizes from 97 to 137 litres. All are produced in the brand’s Pro construction, boasting a full carbon deck and what Goya are calling a Hyper Skin HD – a full covering of a high density sandwich around the fused cell core, said to be a third stronger, stiffer and lighter than the foam used in conventional boards. It comes supplied with thick diamond-grooved deckpads, MFC straps and a quality MFC H1 fin. Looking at the 127 in detail, its outline is full bodied, its rounded nose and tail disguising the fact that the tail and shoulders retain a good deal of width, making the board’s rails decidedly parallel. The deck shape is scooped out around the track and into the nose, intended to plant the sail’s power low and forward, whilst the footstrap plug placements for the front strap are spaced wider to account for varying stances. On the underside there’s a hard edge running along the length of the Bolt’s rails, which exhibit relatively little tuck compared to others in the group, and finish in two tier cutouts, which themselves creep up along the rail and beyond the 1ft off mark. Dressed in bold and eye-catching graphics, with neon yellow markings set against a blue and dark charcoal base colour, this 127 is one of the three larger size Bolts that are also compatible with a foil, thanks to their reinforced Deep Tuttle boxes.

“With its 10 mm of V, it naturally softens the ride over chop on rougher seas. As in our dedicated race board, the Bolt Pro comes with tail cut-outs in combination with a light tail release that helps reduce the wetted surface, providing you with sensational acceleration.”

This is the first opportunity we’ve had to try the new Bolt, and we have to say, what an upgrade this new version represents! At a quoted volume of 127 litres it feels big and stable underfoot, capable of carrying large sails. As the wind fills and power is applied, it gathers pace smoothly and progressively, allowing the rider time to move towards the tail at their pace. The wide voluminous tail feels corky and provides plenty of buoyancy and stability, sitting high on the water’s surface and keeping the rider’s heels high and dry. But the Bolt’s true talents are realised when you compare your speed to your peers. The ride feels easy and comfortable, as if the board is cruising well within its capacity, yet when in a drag race, you realise you’re also travelling at an impressive speed. Requiring little technical rider input, it is incredibly well mannered, flattering the rider and letting them enjoy the ride. This sense that the board is championing your success is carried into transition as well, with plenty of volume and support through the tack, whilst in the gybe the rails bite easily, holding a smooth tactile radius, that can be adjusted and tightened at will. The MFC fin supplied is excellent and compliments the Bolt well; we did try it with a high performance carbon fin also, yet the gains were marginal. Used with a foil, the new Bolt has also improved immeasurably, providing true hybrid performance, rather than simply being ‘foil-readied’. The strap position and deck shape has been optimised, so that there is plenty of connection through the back foot, enabling the Bolt to be compatible with everything from low to high aspect foils. It was one of the stand out foiling boards in this group – a real boost from past generation Bolts. Back in fin mode, when properly powered the 127 sits high and clear of any violent chop, without ever presenting any control issues or becoming flighty on the fin. Fast on all points of sail, there is plenty of traction through the tail, with an emphasis on easy trim and control at all times.

Bottom shape: Pronounced vee in the nose and mid-section, washed with subtle double concave, both fading out towards the rear, becoming subtle flat vee in the tail.

Direct Drive Monocoque. The Direct Drive Monocoque connects your stance to the masttrack, supplying your board with the optimal ratio of stiffness to flex and distributing peak loads to the rest of the board. Additionally a triangular glass patch acts as a backbone to the core of your Freecarve, Freeride and Freerace board, making it stiff and eliminating primary distortions. It furthermore readies your board* to carry a hyrofoil. (* Bolt 115, 125, 135).

Full Carbon Deck. Biaxial Carbon is the perfect reinforcement for adding global torsional stiffness across the board. To add as much of it as possible while retaining a certain amount of desirable forgiving flex in our Freecarve, Freeride and Freerace boards we are covering the entire deck in it.